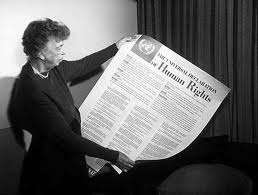 A central tenet of the humanist philosophy is respect for individual autonomy and human rights. This principle was codified by the General Assembly of the United Nations in 1948 when it adopted and proclaimed the Universal Declaration of Human Rights. This document is premised on the inherent dignity and equal rights of all members of the human family, and explicitly recognizes the rights to:

From the explicit rights listed in the Universal Declaration, we can further extrapolate a number of other rights, many of which remain contentious even in countries where basic human rights are respected. Thus, a more expansive list might also include reproductive freedom and access to birth control, humane and rational attitudes toward abortion, gender equality, civil liberties, rights to privacy, and consensual sexual relationships between adults. Less clear applications may deal with capital punishment, euthanasia, and assisted suicide.

One aspect of human rights warrants special consideration by humanists: the status of women. Ensuring the rights of women (including the provision of education and control over their reproductive decisions) has been cited as the single most effective means of improving conditions within a society. Indeed, in those nations where women are relegated to a lesser status than men, it is not unusual to find other human rights abuses practiced.

In 1979, the General Assembly of the United Nations adopted the Convention on the Elimination of All Forms of Discrimination Against Women (CEDAW). This Convention defines discrimination against women as “… any distinction, exclusion, or restriction made on the basis of sex which has the effect or purpose of impairing or nullifying the recognition, enjoyment or exercise by women, irrespective of their marital status, on a basis of equality of men and women, of human rights and fundamental freedoms in the political, economic, social, cultural, civil or any other field.”

This document has entered into force as an international treaty and has been ratified by some 170 nations. Sadly, 20 nations or countries have not yet ratified CEDAW, including (most notably) the United States of America. Others who have not ratified CEDAW include Iran, Syria, Sudan, and Somalia.

The role that a humanist may play in furthering the cause of human rights will depend upon one’s particular circumstances. In places such as the United States, humanist activists could urge public support for ratification of CEDAW or foreign policy that furthers the cause of human rights. In areas directly affected by human rights violations, humanists may develop programs to assist those in need or seek to expose violations to public or international scrutiny. In virtually every society, there is a role for humanists to protect civil liberties, support free public education, and continually advocate for the universal application of these essential human rights.

The Universal Declaration of Human Rights

Whereas recognition of the inherent dignity and of the equal and inalienable rights of all members of the human family is the foundation of freedom, justice and peace in the world,

Whereas disregard and contempt for human rights have resulted in barbarous acts which have outraged the conscience of mankind, and the advent of a world in which human beings shall enjoy freedom of speech and belief and freedom from fear and want has been proclaimed as the highest aspiration of the common people,

Whereas it is essential, if man is not to be compelled to have recourse, as a last resort, to rebellion against tyranny and oppression, that human rights should be protected by the rule of law,

Whereas the peoples of the United Nations have in the Charter reaffirmed their faith in fundamental human rights, in the dignity and worth of the human person and in the equal rights of men and women and have determined to promote social progress and better standards of life in larger freedom,

Whereas Member States have pledged themselves to achieve, in co-operation with the United Nations, the promotion of universal respect for and observance of human rights and fundamental freedoms,

Whereas a common understanding of these rights and freedoms is of the greatest importance for the full realization of this pledge,

Now, Therefore the General Assembly proclaims THIS UNIVERSAL DECLARATION OF HUMAN RIGHTS as common standard of achievement for all peoples and all nations, to the end that every individual and every organ of society, keeping this Declaration constantly in mind, shall strive by teaching and education to promote respects for these rights and freedoms and by progressive measures, national and international, to secure their universal and effective recognition and observance, both among the peoples of Member States themselves and among the peoples of territories under their jurisdiction.