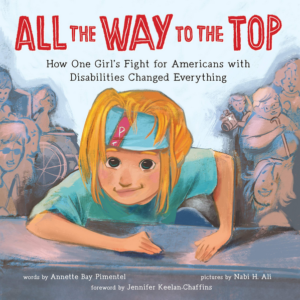 Jennifer Keelan-Chaffins, diagnosed with cerebral palsy two years after she was born, was the youngest participant of the Capitol Crawl, a public demonstration held in Washington, DC, on March 12, 1990, to convince lawmakers to pass the Americans with Disabilities Act (ADA).

Although the ADA was passed and signed into law on July 26, 1990, Keelan-Chaffins and other people with disabilities continue to fight for their rights and have their voices heard. Her story is spreading with a new children’s book, All the Way to the Top, written by Annette Bay Pimentel and illustrated by Nabi H. Ali, and a statue of her called All the Way to Freedom by Denver sculptor Gina Klawitter. Read the full article here.