Think is a registered charity producing shareable, science-based, multilingual videos in an effort to inform and inspire underserved communities. Driven by a desire to address the Eurocentrism of most educational content (especially on YouTube, where 70% of viewing is for education), we’re led by a team of humanist human rights activists, technologists and academics from the communities most affected by the ‘new digital divide’. Think creates expert-led, beautifully-produced videos that help individuals make sense of the world around them – topics range from paleogenetics to the history of high heels.

In this talk, Think’s founders Bonya Ahmed and Imtiaz Shams will talk about their work in creating videos in Bangla and English and how these videos are creating discussions about science, history, and rights in communities that are often targeted by fake news and conspiratorial thinking. 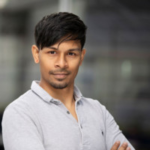 Imtiaz Shams is a tech entrepreneur and human rights activist who has used his experience to help apostates who suffer when they leave conservative religions. In 2015, he set-up Faith to Faithless, an organization working to reduce the stigma faced by ‘apostates’ of all religions. He has been featured on the BBC, Vice, the Guardian, the Times, and his charity program has helped thousands find a place in a world that often dehumanizes the non-religious. In 2019 along with Bonya Ahmed he set up the educational charity Think School, creating education videos in multiple languages on topics like science, history and human rights. 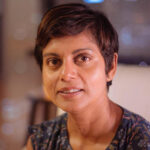 Rafida Bonya Ahmed is a Bangladeshi-American author and a campaigner for human rights and secular values. She is the widow of Avijit Roy, a well-known writer and activist. Avijit and Bonya were brutally attacked in the middle of the street by Islamists during a book-signing trip to Dhaka, Bangladesh, on February 26, 2015. Avijit was murdered and Bonya was gravely injured during the assault. Bonya continues to work with international and local groups to help Bengali bloggers and activists and to seek justice for Avijit and other secularists killed in her native country. She is a visiting fellow at the London School of Economics since the fall of 2018, working on the rise of Islamic fundamentalism. She is a moderator and a blogger at Mukto-mona, the first online platform for Bengali-speaking freethinkers, founded by the late Avijit Roy.