The Art of Thinking Freely: A Conversation about Diderot with Andrew S. Curran 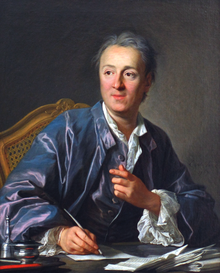 The American Humanist Association and Other Press are proud to co-host the premiere episode of The Other Reader with Chris Stedman Wednesday, June 17 at 2-4pm EST! In this first episode, Chris talks to author Andrew S. Curran about his new book Diderot and the Art of Thinking Freely and the philosopher’s impact on the Enlightenment and modern thought. The American Humanist Association will be hosting the Q&A portion of the event on their Facebook page.

Other Press is giving AHA Members 30% off purchases of Diderot with discount code AHA30 at checkout.

Chris Stedman is a Minneapolis-based writer, speaker, and community organizer. He is the author of IRL (out 10/20/20) and Faitheist, “an intimate and deeply affecting portrait… [that] proves [he is] an activist in the truest sense and one to watch” (Booklist, Starred Review). Chris has appeared on CNN, MSNBC, PBS, and Fox News, and has written for publications including The Guardian, The Atlantic, BuzzFeed, Pitchfork, VICE, CNN, MSNBC, Salon, The Advocate, USA Today, The Huffington Post, The Rumpus, INTO, The LA Review of Books, Catapult, and The Washington Post. He currently writes THREAD, a newsletter exploring the threads connecting online and offline life. Learn more about Chris here.

Andrew S. Curran is the William Armstrong Professor of the Humanities at Wesleyan University. The author of two previous books, Sublime Disorder: Physical Monstrosity in Diderot’s Universe and The Anatomy of Blackness: Science and Slavery in an Age of Enlightenment, Curran is a Fellow in the history of medicine at the New York Academy of Medicine and a Chevalier dans l’Ordre des Palmes Académiques.