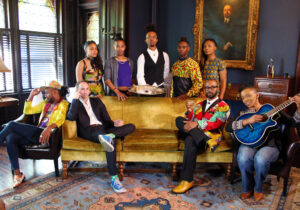 Jé Hooper, Director and Creator of “Humanitas: A Conscious Coloring of Kindness,” will discuss how his film aims to assist with developing strategies for reconciliation and restorative justice. Felix Adler (Ritchie Szoke), the founder and philosopher of the Ethical Culture Movement, and W.E.B. DuBois (Joe Tolbert), the author of “the Souls of Black Folk” and activist-scholar, are re-imagined in this histo-contemporary retrospective of July 1900 through a series of poetic prose, soulful music, and choreo-movements. DuBois, after completing a variety of lectures and books is endowed by spirit-of-rightness with a new love for the intersectionality of Africaniety; where all lives can’t matter until black lives matter. As a result, his passion becomes contagious to anyone who comes in contact with his affectious conscious-kindness–his heart-work becomes the coloring of white spaces. Through an encounter with DuBois, Adler ‘weighs the soul’ of the young negro leader and establishes a life-changing relationship that is solidified at the first Pan-African Conference at the Westminster Hall in London. Adler is also challenged by this consciousness, conflicted by the thoughts of other intellectuals, who reveal a hidden unethical-racist agenda for scholastic fame, and a refusal to acknowledge the true souls and spirits of black folks.

Jé Exodus Hooper is a PhD Interdisciplinary Arts Candidate at Ohio University and the founder of FrequencyHouse Productions. He is a Humanist clergy-leader within the American Ethical Union and First Unitarian Society of Minneapolis. Based in the Mid-Atlantic region, his work as creative-clergy and a performance-scholar is focused in decolonizing Humanism, homiletics, and Black Intellectual Thought. His love for performative rhetoric involves a decolonized aesthetic of Black homiletic folk-talk– one of imagination as responsive reasoning. His word-working emphasizes human freedom and interconnectedness through embodiment, intuition, creativity, and improvisation. His folx-talk emerges into a love language that aids congregational practice of culture care for empowering community-life.

Jé’s most recent Facebook Live and IGTV production, Keep Liv’n, emphasizes the importance of cultural care and self-care. His debut film, “Humanitas: A Conscious Coloring of Kindness”, is based on the relationship of W.E.B. DuBois and Felix Adler and was sponsored and funded by American Ethical Union’s Mossler Fellowship. Other works include “Moving Upon the Face of the Deep,” featuring Dr. Cornel West; “The Black Sacred Communion,” and a collaboration with his life partner, storäe michele, entitled, [the listening heart].

It is through critical, yet creative, secular ritual formations that he supports people in contesting cultural bias within race, gender, religion, sexuality, and ableism. These intersections of thoughts and practicality console and agitate communities in re-imagining and re-claiming a narrative that honors the inherited worth and dignity within all people at its highest regard.