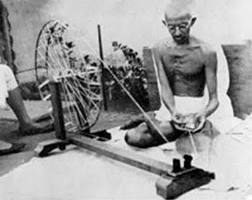 The Non-Cooperation Movement was a significant phase of the Indian struggle for freedom from British rule. This movement lasted from September 1920 to February 1922. It was led by Mahatma Gandhi and was supported by the Indian National Congress. It aimed to resist British occupation in India through non-violent means. Protestors would refuse to buy British goods, adopt the use of local handicrafts, picket liquor shops, and try to uphold the Indian values of honour and integrity. The Gandhian ideals of Ahimsa or non-violence, and his ability to rally hundreds of thousands of common citizens towards the cause of Indian independence, were first seen on a large scale in this movement.

Among the significant causes of this movement were colonial oppression, exemplified by the Rowlatt Act and Jallianwala Bagh massacre, economic hardships to the common man due to a large chunk of Indian wealth being exported to Britain, ruin of Indian artisans due to British factory-made goods replacing handmade goods, and popular resentment with the British over Indian soldiers dying in World War I while fighting as part of the British Army –, in battles that otherwise had nothing to do with India

The calls of early political leaders like Mohammad Ali Jinnah (who later became communal and hardened his stand), Annie Besant and Bal Gangadhar Tilak (Congress Extremists) for home rule were accompanied only by petitions and major public meetings. They never resulted in disorder or obstruction of government services. Partly due to that, the British did not take them very seriously. The non-cooperation movement aimed to ensure that the colonial economic and power structure would be seriously challenged, and British authorities would be forced to take notice of the people’s demands. Here we should know that many revolutionaries like Bhagat Singh, Chandra Shekhar Azad were supporters of this very movement but were really dissatisfied by the dismissing of movement by Gandhiji.

Gandhiji had shown a similar movement in South Africa and in 1917-18 in Champaran, Bihar and Kheda, Gujarat that the only way to earn the respect and attention of British officials was to actively resist government activities through civil disobedience.

Now in Champaran and Kheda in 1918 he led impoverished farmers, mired in social evils like unhygienic conditions, domestic violence, discrimination, oppression of women and untouchability. On top of their miseries, these people were forced to grow cash crops like indigo, tobacco and cotton instead of food, and for this they were virtually not compensated. In addition, they had to pay taxes despite a famine.

The Governments of the affected regions signed agreements suspending taxation in face of the famine, allowing the farmers to grow their own crops, releasing all political prisoners and returning all property and lands seized. It was the biggest victory against the British Empire since the American Revolution.

Gandhiji were assisted by a new generation of Indian revolutionaries like Rajendra Prasad and Jawaharlal Nehru. In Kheda, the entire revolt had been led by Sardar Vallabhbhai Patel, who was to become Gandhi’s right hand man.

A meeting of unarmed civilians was being held at Jallianwala Bagh near the Golden temple in Amritsar. The people were fired upon by soldiers under the command of Brigadier-General Reginald Dyer. He also ordered the only exit to be blocked. The massacre resulted in the deaths of some 370 protestors while over 1000 were injured in the shooting. The outcry in Punjab led to thousands of unrests, protests and more deaths at the hands of the police. The Jallianwala Bagh Massacre became the most infamous event of British rule in India. Gandhiji was horrified. He lost all faith in the goodness of the British government and declared that it would be a “sin” to cooperate with the “satanic” government.