This work frustrates a lot of people, because it often brings to mind notions of folks having to literally give up material resources.  For instance, if a white person got a job in part because of their privilege, then the only way to respond to that privilege is to give up that job.  This is a popular, albeit oversimplified understanding of white privilege, and not exactly what McIntosh had in mind, as the image of her examples reveals.  It also oversimplifies how we respond to white privilege.  Perhaps this definition is effective, but it is not very realistic.  And it might not be necessary, either. 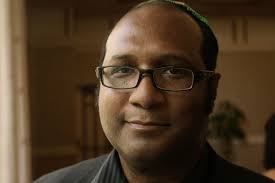 A second way to understand white privilege is offered by another scholar, existential philosopher Lewis Gordon.  His basic argument is that what we tend to call privileges should more accurately be labeled as “rights.”  No one should have an upper hand in job or school applications.  Rather, the opportunities provided by privilege are better thought of as rights.  Everyone should have the right to equal treatment, fair housing, etc. Gordon writes:

A privilege is something that not everyone needs, but a right is the opposite.  Given this distinction, an insidious dimension of the white-privilege argument emerges.  It requires condemning whites for possessing, in the concrete, features of contemporary life that should be available to all, and if this is correct, how can whites be expected to give up such things?  Yes, there is the case of the reality of whites being the majority population in all the sites of actual privilege from prestigious universities to golf clubs and boards of directors for most high-powered corporations.  But even among whites as a group, how many whites have those opportunities?1Lewis R. Gordon, “Critical Reflections on Three Popular Tropes in the Study of Whiteness.” In G. Yancy, ed., What White Looks like: African-American Philosophers on the Whiteness Question (Psychology Press, 2004), 176.

The question of white privilege gets reoriented by Gordon as rights—not as white folks relinquishing material resources, but as all of us coming to find ways for everyone (white, black, brown, etc.) to have equal access to opportunities, the same “rights” in the social world, making life flourishing possible, a very humanist perspective on white privilege.

A third manner of thinking about privilege can be thought of in a negative sense.  Privilege, all expressions of it that you hear about, might be understood as access to the ability to deny one’s social responsibility to someone else.  Let’s restate that.  We might also think of white privilege as the ability to deny one’s social responsibility to another person.2Driscoll, White Lies, 2015.  So to the extent that a job has been afforded to a person in part because of their skin color, the privilege is not necessarily the job, itself.   privilege is what the white skin and the job, collectively, might produce in the form of the ease with which that person is able to deny or 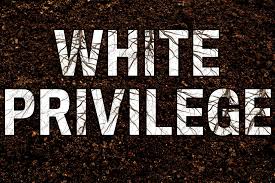 remain ignorant of the manner in which that job and that person’s social location have consequences for other people.  So when you talk about giving up white privilege, we don’t have to be talking specifically about giving up material resources or tangible goods or ideas.  Rather, giving up white privilege involves giving up those things that allow a person to deny their intrinsic connection to other people.  In fact, philosopher Paul C. Taylor defines contemporary racism as disregard of others.3Taylor, 34.  With such a definition of racism in mind, at the end of the day, white privilege remains fundamentally connected to racism in that it amounts to the sum total of opportunities to deny and disregard the concerns of others.  This could involve material resources, but it could also involve giving up willful ignorance.  It could involve giving up staying silent at a job interview regarding questions of diversity and inclusion.  It involves speaking up as much as relinquishing or staying quiet.  It involves putting our resources and possibilities on the line, so that others might have greater access to resources of their own.

This second and third ways of understanding white privilege have a decidedly humanistic edge, and it might help those humanists who have trouble making sense of the typical manner in which white privilege is discussed.  The question is not how can I relinquish my resources so that others can have access to them, but how can I use my privilege to efface change so that others might have greater options in the social world.  How can I use my job or education to promote a more equitable social arrangement?  For instance, we know that many arrive at atheism through educational opportunities that aren’t provided to everyone.  Does this mean we must give up on atheism or humanism because we’ve arrived at these positions through various advantages?  No, relinquishing privilege means we use these opportunities for the sake of opening possibilities for others and through a willingness to understand these opportunities and perspectives as connected—at many levels—to other people, to theists and believers, too, as much as raced or gendered marginal social actors.

is an Afro-Jewish philosopher, political thinker, educator and musician (drums and piano), who was born on the island of Jamaica and grew up in the Bronx, New York, where he attended Evader Child’s High School, played jazz in NY night clubs, and went to Lehman College under the Lehman Scholars Program (LSP) where he graduated with honors in political science and philosophy as a member of the Chi chapter of Phi Beta Kappa. His undergraduate mentor and lifetime friend, Gary Schwartz, with whom he also studied Greek and ancient literature, was Director of the LSP. Gordon then taught social studies at Lehman High School, where he founded The Second Chance Program for In-school Truants and then studied for his doctorate at Yale University, where he met his graduate mentor, the great Maurice Natanson, a phenomenologist and existentialist who was also a child of Yiddish theater in Brooklyn, New York, and whose mentor was Alfred Schutz, the great Austrian Jewish Phenomenologist of the social sciences.

Gordon’s research in philosophy is in Africana philosophy, philosophy of existence, phenomenology, social and political philosophy, and philosophy of science. His philosophy and social theory have been the subjects of many studies in a variety of disciplines. While he has written on problems of method and disciplinary formation in the human sciences, Gordon has more recently devoted attention to problems in philosophy of physics, especially through a series of ongoing discussions and research projects with Stephon Alexander, who teaches physics at Dartmouth College. In addition to theories of social transformation, decolonization, and liberation, Gordon’s research in social political philosophy also addresses problems of justice and it normative scope.

As a public intellectual, Gordon has written for a variety of political forums, newspapers and magazines. Gordon is married to the political theorist, Jane Anna Gordon, and is a member of Kehilat Chaverim.

“To have lived in bad faith is to have evaded recognition of oneself as a human being. It is to have lived a fugitive existence…To die in bad faith, then, is tantamount to having never lived.” –Bad Faith and Antiblack Racism, p. 183