Join us at the AHA headquarters in DC October 17, 6:30-8:30pm for this talk, discussion, and light refreshments. 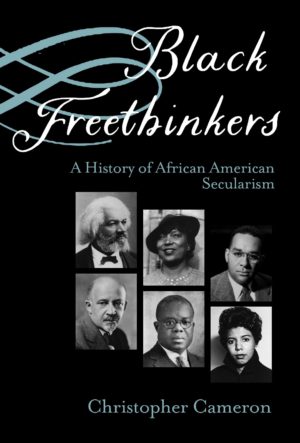 This talk will explore the origins of black freethought among 19th century slaves, many of whom could not reconcile notions of a loving God with their condition on Earth. The talk will then examine the intersection of freethought with twentieth century cultural and political movements such as the Harlem Renaissance, radical leftist politics, and the Black Power movement. Cameron argues that religious skepticism was prevalent among some of the most prominent voices in African American history, including Frederick Douglass, W. E. B. Du Bois, A. Phillip Randolph, Richard Wright, James Baldwin, Lorraine Hansberry, Huey Newton, and Alice Walker.

Christopher Cameron is an Associate Professor of History at the University of North Carolina at Charlotte. He is also the founder and past president of the African American Intellectual History Society. He received his B.A. in History from Keene State College and his M.A. and Ph.D. in American History from the University of North Carolina at Chapel Hill. His research and teaching interests include early American history, the history of slavery and abolition, and African American religious and intellectual history. Cameron is the author of Black Freethinkers: A History of African American Secularism (Northwestern University Press, 2019), To Plead Our Own Cause: African Americans in Massachusetts and the Making of the Antislavery Movement (Kent State University Press, 2014) and co-editor of New Perspectives on the Black Intellectual Tradition (Northwestern University Press, 2018). His current book project, entitled Liberal Religion and Race in America, explores African Americans engagement with liberal sects such as the Unitarians and Universalists from the revolutionary era to the creation of Black Lives of Unitarian Universalism in 2015.