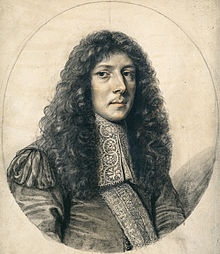 12 March 1626 -7 June 1697, was an English antiquary, natural philosopher and writer. He is perhaps best known as the author of the Brief Lives, his collection of short biographical pieces. He was a pioneer archaeologist, who recorded (often for the first time) numerous megalithic and other field monuments in southern England, and who is particularly noted as the discoverer of the Avebury henge monument. The Aubrey holes at Stonehenge are named after him, although there is considerable doubt as to whether the holes that he observed are those that currently bear the name. He was also a pioneer folklorist, collecting together a miscellany of materials on customs, traditions and beliefs under the title “remaines of Gentillisme and Judaisme”. He set out to compile county histories of both Wiltshire and Surrey, although both projects remained unfinished. His “Interpretation fo Villare Anglicanum” (also unfinished) was the first attempt to compile a full-length student of English place-names. He had wider interests in applied mathematics and astronomy, and was friendly with many of the greatest scientists of the day.

Moral Arguments for the Existence of God

Moral arguments for God’s existence form a diverse family of arguments that reason from some feature of morality or the moral life to the existence of God, usually understood as a morally good creator of the universe. Moral arguments are both important and interesting. They are interesting because evaluating their soundness requires attention to practically every important philosophical issue dealt with in metaethics. They are important because of their prominence in popular apologetic arguments for religious belief. Evidence for this can be found in the amazing popularity of C.S. Lewis’s “Mere Christianity” (1952), which is almost certainly the best-selling book of apologetics in the twentieth century, and which begins with a moral argument for God’s existence. Many ordinary people regard religion as in some way providing a basis or foundation for morality. This fact might seem to favor religious arguments for morality rather than moral arguments for religious belief, but if someone believes that morality is in some way “objective” or “real”, and that this moral reality requires explanation, moral arguments for God’s reality naturally suggest themselves. The apparent connection between morality and religion appears to many people to support the claim that moral truths require a religious foundation, or can best be explained by God’s existence, or some qualities or actions of God.