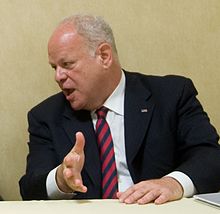 Born August 12, 1942 is an American psychologist, educator and author of self-help books. Since the late 90’s, Seligman has been an avid promoter within the scientific community for the field of positive psychology. His theory of learned helplessness is popular among scientific and clinical psychologists. A Review of General Psychology survey, published in 2002, ranked Seligman as the 31st most cited psychologist of the 20th century.

Seligman is the Zellerbach Family Professor of Psychology in the University of Pennsylvania’s Department of Psychology. He was previously the Director of the Clinical Training Program in the department. He is the director of the university’s Positive Psychology Center. Seligman was elected President of the American Psychological Association for 1998. He is the founding editor-in-chief of Prevention and Treatment Magazine (the APA electronic journal) and is on the board of advisers of Parents magazine.

Means to an End

In philosophy, the term means to an end refers to any action (the means carried out for the sole purpose of achieving something else (an end). It can be thought of as a metaphysical distinction, as no empirical information differentiates actions that are means to ends form those that are not–that are “ends in themselves.” It has been incurred that all actions are means to other ends; this is relevant when considering the meaning of life.

Immanual Kant’s theory of morality, the categorical imperative, states that it is immoral to use another person merely as a means to an end, and that people must, under all circumstances, be treated as ends in themselves. This is in contrast to some interpretations of the utilitarian view, which allow for use of individuals as means to benefit the many.